The Chaotic Double Pendulum Synthesizer is an attempt to find musicality in the laws of physics that govern our world.

The double pendulum is a simple idea, but complex mathematically. The basic idea of a chaotic double pendulum is that it is a simple physical system (a pendulum attached to the end of another pendulum) that exhibits rich dynamic behavior (much more interesting motion that one would expect) with a strong sensitivity to initial conditions. The motion is often described by physicists as unexpectedly mesmerizing.

The goal of this project is to capture that mesmerizing motion with electroacoustic music using Max/MSP motion tracking and sound processing. By feeding data about the position, velocity, and acceleration of the pendulums into a series of oscillators, we can “listen” to the chaos that governs some of the laws of physics of our universe.

Click here to learn more about some of the math behind coupled pendula. Additionally, click here to watch a demo of a chaotic double pendulum.

Click the image below to watch a brief demo of the synthesizer. 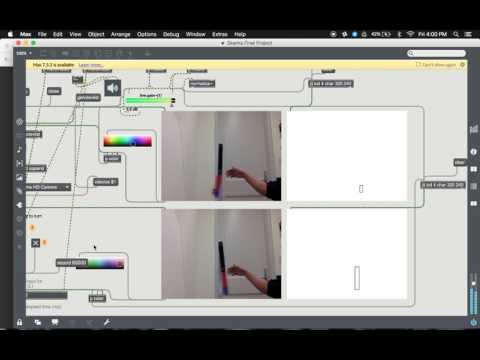